Pack your bags, we’re off to Barcelona!

Hola, friends! I’m finally adjusting back to the 9-6 grind after the most incredible 10 days in Spain! I seriously can’t believe how fast the trip went. It feels like just yesterday we were gallivanting through Barcelona drinking Sangria, eating tapas, and taking in Antonin Gaudi’s spectacular architectural feats. Seriously, between the culture, the food, and the language, this city is amazing! This was my first trip to Barcelona and I have zero doubts that I’ll be back (fingers crossed it’s soon!) This is a long read, I know, but make sure you make it to the end for my vlog!

How you’re getting around:

While many of the main sites in Barcelona are spread out, it’s still a fairly walkable city and it’s really easy to navigate by either foot or subway. While we used the subway to get to the Sagrada Familia and home from Park Güell, we walked most of the time. Keep in mind that Uber just isn’t a thing in Barcelona. We were kind of bummed when we realized we would have to fight for a good old taxi cab. Hailing a cab can be pretty tricky at night, especially in a neighborhood like El Raval (where we stayed!), so plan accordingly (not like you’ll be out before 1 a.m. anyway!) And while on the topic of transportation: it was incredibly easy to get from the airport into the city. We took the €5.90 A1 Aerobus, which runs about every 5 minutes, from 5 a.m. to 1 a.m.  It has AC, WIFI, and an area to store your luggage. Plus it beats a €40 cab ride. Learn more and buy tickets aquí. 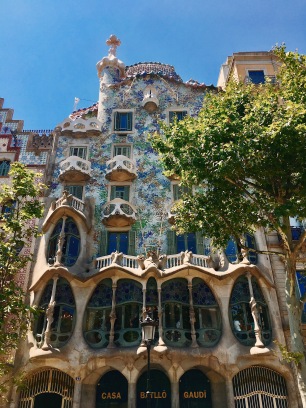 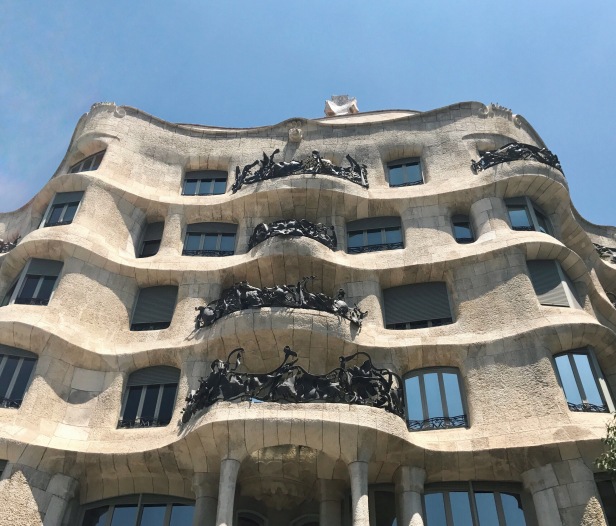 Casa Milà &  Casa Batlló: Odds are, you’ve seen pictures of both Casa Milà and Casa Batlló, which are two of Antonin Gaudí’s staple buildings in Barcelona. They are absolutely amazing!  We didn’t go inside either of them, but apparently, the Casa Milà rooftop is awesome. Beholding the buildings from the street was good enough for us, though, since we were on a time crunch (to get to a rooftop bar, naturally). Both buildings are on Passeig de Gracia and are about a 10-minute walk from each other. 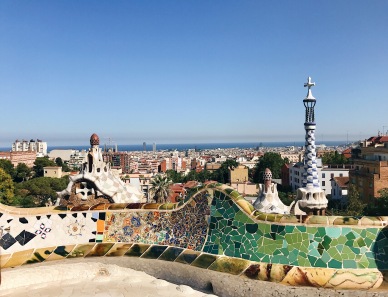 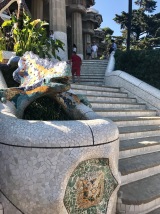 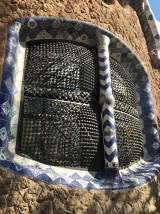 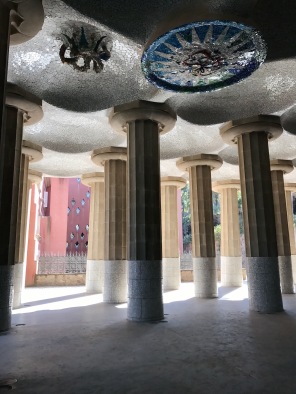 Park Güell: The pictures of Park Güell just don’t do it justice.  The intricate details are crazy and I found the colorful ceramic tiles totally mesmerizing! Take the subway to Vallcarca and head up to Park Güell from there via the escalator. Don’t walk there from say, the Sagrada Familia. Just don’t do it. It’s a very steep climb up hill and your glutes will burn, baby, burn. Entrance to the park is on a 15-minute basis and I would strongly suggest buying your ticket online ahead of time. Get ready to battle every other tourist in the park for that iconic pic!

Catedral de Barcelona: The Catedral de Barcelona is stunning, and late in the afternoon, you can find tons of crowds sitting on the steps taking in the sunshine. We didn’t go inside for a tour, but we walked around the front of it while we explored the Gothic Quarter.

Plaça de Catalunya:  Honestly, I don’t think there’s much to see in the plaza itself, but the Plaça de Catalunya deserves a spot on your list because it’s a major hub in Barcelona and is where the old city and the Eixample neighborhood meet. Tons of people. Tons of stores. Tons of pigeons. Anyway, there’s an Apple Store, a Sephora, and a Zara all right there (sold!) and being that it’s on the way up to Passeig de Gracia, you’ll definitely walk through it at some point. Head straight north on La Rambla to get there.

Getting lost in the Gothic Quarter:  The Gothic Quarter is the heart of Barcelona’s Old City. The winding old stone roads and buildings made me feel like I was back in Florence all over again! There are tons of major shops (think: Mango, Vans, etc.) , but I really loved wandering through the old streets and alleyways. It’s just a great place to go off the grid and take in some of the city’s history. 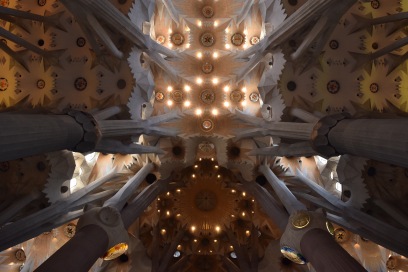 Touring the Sagrada Familia: Gaudí’s most impressive work! The Sagrada Familia tour is a must-do whether you’re into visiting tourist attractions or not. It’s one of the most incredible pieces of (unfinished) architecture I’ve ever seen and I was in absolute awe. Gaudí died before he could finish it, so it’s literally still under construction. Those cranes were really killing my vibe. We did the tower tour, which is definitely not necessary. I feel like you can get away with skipping the guided tour, too. Just walk around the bottom floor and take it all in! Entrance and tours are held at specific times, so buy your tickets online in advance. Save €2 and choose the under 30 entrance option. And HEADS UP, ladies: while there isn’t a dress code, you will likely be asked to cover up if you’re in anything deemed a little too revealing. I covered up my shoulders and low cut neckline with a shawl. 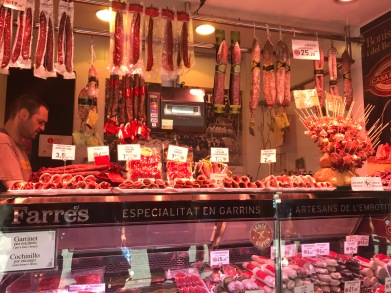 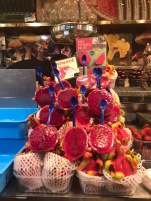 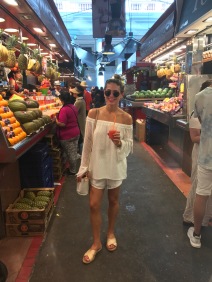 Indulging at La Boqueria: Meat, cheese, and seafood, OH MY! This world-famous market (no joke: CNN named it the world’s best market back in April) is absolutely incredible and boasts an impressively huge selection of authentic Spanish food, herbs & spices, candy, and my personal favorite: JUICE. Cheap juice. You are literally going for the juices, which cost around €1.50 and are the freshest fruit juices I’ve ever tried. Bounce around and try different flavors from various stands. The market is located right off La Rambla and you’ll need to get cash out beforehand.

Walking La Rambla: and that’s about it. I’ve been told by various people to avoid eating and drinking on La Rambla because it’s touristy and expensive. Still, you should totes walk the strip and check it out. We walked up, down, and across La Rambla various times over the weekend.  It’s definitely touristy and I would advise staying off La Rambla late at night, as you’ll find tons of promoters trying to persuade you to go to whatever bar or club they’re pushing. People will also try to sell you weed and cans of beer. It’s all harmless, but I just found it annoying. Get out of my personal space, plz. 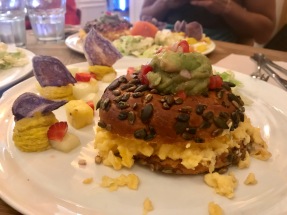 Brunch & Cake: Worth the wait. It rhymes for a reason. Super funky dishes that are both healthy, delicious and pleasing to the eye (and your Insta). You’re trying the yogurt and granola bowls! 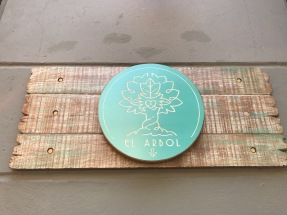 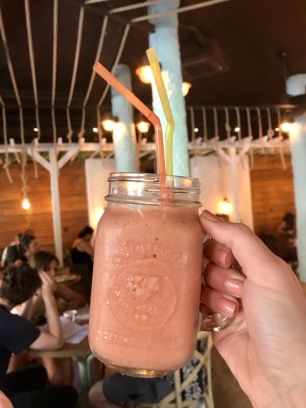 El Árbol: This is a really decent backup option if you just can’t wait for Brunch and Cake. They have coffee, smoothies and tons of classic breakfast options from scrambled eggs to avocado toast to acai bowls! I suggest trying the smoothies! And it has such a great atmosphere too! I was big fan of the swinging seats.

Rosa del Raval: This trendy Mexican joint is definitely a great spot for eating like the locals. Cheap drinks, good food and a funky atmosphere: we were sold! We got there around 10 PM, and unfortunately, we had to wait a while for a table because this is Barcelona and people eat SO LATE. We passed the time at the bar with margaritas, mojitos, guac, and nachos. It was totally worth the wait!

Ciudad Condal &  La Alcoba Azul: Both of these spots are great tapas options! Ciudad Condal is a huge restaurant with a decent sized bar. Ben and I got a bunch of small tapas plates to share and they were delish! La Alcoba Azul has a really great outdoor area in the winding streets of the the Gothic Quarter. We all had variations of flatbread with toppings! So good (even though I ordered the wrong one because I was too focused on my Spanish grammar…oops. )

Sugar Bar: The nicest “dive bar” I’ve ever seen! We stopped at the Gothic Quarter’s Sugar Bar one night for some post dinner drinks. The atmosphere was really cool. It was really dark, and felt both trendy and cozy! The drinks were relatively cheap at that hour, but they do a super cheap happy hour, too! 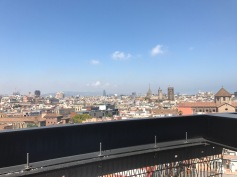 360 Degrees at the Barceló Raval: There’s a reason why this bar is called 360 Degrees. It’s a circular hotel that features a rooftop with 360-degree views of Barcelona! Envision it: city and ocean views, Barca sunshine, and a glass of rosé in hand. It’s the perfect pit stop for sipping on an afternoon drink or for watching the sun set behind the mountains in the distance.

Bar Lobo: If you’re in the mood for Sangria, you’re undoubtedly headed to Bar Lobo in El Raval. We split a pitcher of white Sangria and it was perfection!  Bar Lobo is a really sleek, open space with tons of natural light. There’s also outdoor seating! Hungry for something small? Try the hummus!

Cheap Cervezas: No joke: nearly anywhere. The first beers we bought in Barcelona were  SO cheap. Literally, €2.50 a pint! Beats $8 dollars, huh? There are tons of little bars and restaurants with outdoor seating,  so go nuts!

Just for S’s & G’s: As someone who prefers to drink like the locals, I would definitely say this bar is an American tourist hot spot. I figured it was worth putting on this list for the banter. You may have heard of Dow Jones Bar, and being New Yorkers, we obviously had to check it out. All of the drinks, including beers, shots and cocktails, have fluctuating prices that mimic rising and falling stock prices on the New York Stock Exchange. They’re super cheap to begin with!

Razzmatazz: A great club option if you’re looking for somewhere aggressive! There are various floors featuring different music genres. I preferred the house/trance floor, and interestingly, there was literally a DJ spinning in the bathroom. You can buy tickets at the

door, but I’d advise buying them online ahead of time. It appears that they come with a free vodka red bull (paid for that one when we toured the Sagrada Familia the next day, ouch!) and being that Barcelona knows how to party, don’t expect to go until around 2-2:30 AM!

And there you have it: The New Yorker’s Guide to Barcelona! If you’re heading there sometime soon, I envy you! Get ready to get lost in one of the most amazing cities in the world!!

NOTE: This version of my guide is adapted from the original version on Out of Office NY. Check it out here!!

3 thoughts on “The New Yorker’s Guide to Barcelona ”